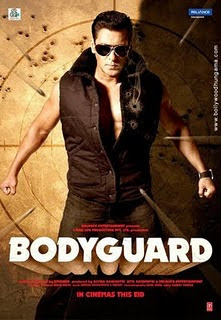 Rating: ★ ★  ★ 1/2
After superhits like Wanted(2009) and Dabbang(2010),get ready for another Eid-Volcano Bodyguard.Salman khan and melodious tunes are synonymous to each other.Sajid-Wajid has been scoring music in Salman's movies for decades,from making debut in 1998 through Pyar Kiya to Darna Kya to Wanted(2009) and Dabbang(2010) most recently.But for Bodyguard,an usual combination of Pritam and Himesh Reshammiya is awaiting for the listeners.After a long time Himesh has composed for a movie where he is not acting,his last recognised non-acting venture was back in 2007 "Apne".After trying his hands on being an all-rounder in the entertainment industry and failing misrebaly,he comes back to what he is best at,'scoring music'.Lyrics are by Shabbir Ahmed and Under-rated,highly talented,Neelesh Misra .Expectations are very high from the music of the film,the song"I Love You" is already close to being a chartbuster with its teasers making rounds on television and radio channels.Lets see what Dhinka Chika can this Bodyguard do.
The album boasts of  massive 12 tracks,but surprisingly only 4 originals with few Reprises and Remixes with 1  average instrumental.To add shock to surprise 3 out of 4 originals have been composed by Himesh Reshammiya(who swear not to use other male singers for his music scores after success of Aashiq Banaya Aapne) and only 1 has been composed by Pritam.

The album opens with the Title song BodyGuard composed by Himesh .The song opens with few tapori lines with salman saying 'Mujh par ek ehsaan karna,ki mujh par koi ehsaan na karna' ,the starting made me ready for another 'Bang Bang Bang'(Hello) but 40 seconds into the song and it takes a complete U-Turn towards Dhinka Chika(Ready) with high drum beats,a style more popular in south.Its a song which will not work in isolation,the video with Salman-Katrina(guest apperance) will make the song popular rather than just the audio.An average song which hampers a good start for the album.

Then comes I Love You,the only composition by Pritam in the movie and the only song written by Neelesh Misra.Pritam brings in Ash King(remember Te Amo from Dum Maaro Dum) and Clinton Cerejo for this one.Its a chartbuster straighaway with Ash King making the song infectious with his soul-stirring voice and beautiful yoodles by Clinton Cerejo who comes in for brief interlude after 2 minutes.It would be injustice to compare the song to Pritam's earlier composition Te Amo also sung by Ash King ,however the harmonica portions in the song makes some resemblance with Dil Keh Raha Hai from the movie Kyon Ki (2005).Neelesh Misra's urbane-cool wordings are impressive.A must hear song.
Its remix is passable while the highlight of the album is I Love You Unplugged sung by Shaan and Clinton Cerejo.Clinton starts the song with a lovely mellifluous "odo lo li lo oo ooo" and then Shaan joins in with his sugary sweet vocals and makes the song worth a hear.It was impressive to see how Pritam used the techno-rocky voice of Clinton Cerejo for the brief interludes between the song.


Desi Beat composed by Himesh and sung by Mika Singh and Amrita Kak(Dhinka Chika fame) is a kind of song one would hate at the first hear due to the unsual lyrics(Main utra aaj Ishq de akhaade) and musical arrangements very similar to Tum Kya Jaano Mohabbat Kya Hai(Hum Kisi Se Kum Nahin) at the very start of the album.But as the song progresses it tends to get better and with few hearings it will settle down among the listeners.An average composition neither brilliant nor bad.
Its Remix has nothing new to offer but Desi Beat- Punjabi Hip Hop Mix for which Alam Gir Khan(where did he come from) replaces Mika, has a rustic-punjabi touch to it and is a perfect dance number.Alam Gir Khan,who makes debut in this song, impresses with his high-pitched singing in this 4 minute number.

When Himesh Reshammiya's(H.R.) name is attached to an album,one expects a sad-slow-soulful number and Teri Meri,Meri Teri is a trademark H.R. composition which will be an instant hit amongst the H.R. fans.Two extremely talented but hugely diverse artists Rahat Fateh Ali Khan and Shreya Ghosal come together for this one and at various high notes,Rahat F.A.K's voice resembles Himesh's style of singing.The song may not be a chartbuster but will attract attention for sure.
Its other 2 versions,Reprise and Remix disappoints.The reprise version would have sounded better in the voice of Himesh himself and would have added new dimesnsions to the song but the singers and the lyrics are same in all the 3 versions. Unnecessary is the word for both Repsire and Remix of Teri Meri.

An instrumental at the last is named Theme Instrumental but actually its just a Remix-Instrumental of the song Teri Meri.It could have been better.

To conclude,Pritam with his 1 song(I Love You) makes an impact over H.R.'s 3 compositions,having said that,Teri Meri will grow with time and the success of Desi Beat along with the Title song will depend upon the promotional videos and their picturisation in the movie.
I rate it 3.5 out of 5.