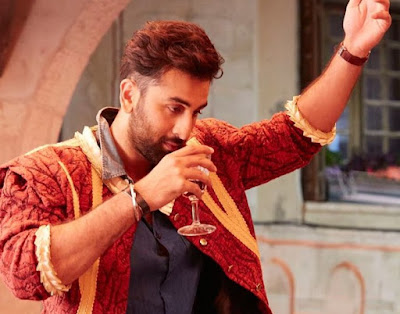 "Its like a creative painting on the canvas where you will either appreciate the in-depth of every artistic brush stroke used or you will see it as a mere sheet of paper with several colours spilled on it."

Remember, when you were a small kid, you did silly things, things that excited you, things that made you curious and all that was done without any motive, without any fear, nobody told you to do things, if you liked something you did it..That’s the basic notion that came to my mind when Ranbir Kapoor talks to his family in the climax and described his 'Bachpan' as the only thing that praised him, only thing that said 'Hey! You are Special' and how we let that phase die when we grow up!

There are several moments in the movie that are heart wrenching, one of the most amazing of them comes post interval where Deepika confronts Ranbir and seeks forgiveness upon realising that she has tickled the most complex emotional part of him which is followed by a brilliant composition ( Agar Tum Saath Ho). No one in this industry justifies a scene with a song with so much grace and perfection like Imtiaz Ali, such that the overall result is so honest and genuine that it touches your soul. Music has always been an important aspect of his ventures and same goes here where it’s used as a narrative to enhance the inherent drama of the situation, Matargashti, Safarnama, Tu Koi Aur Hai are the soul of the movie and depicts various moods in the narrative.

The story unfolds in a non linear way where we see the transformation of Ved as to how he is fascinated by mythological stories and weaves his childhood imagining them at every step, people around him are merely characters from some or the other stories he had heard before, then we see him as a person who has killed his wildness, his passion, his stories and has now become blunt to be a participant in a race whose cause is undefined, to be a part of the society where people are competing and running for financial security without giving a second thought as to who they are from the inside and what they want from life as a result he becomes a person who works nine to five, is well behaved, even when it comes to sex. There is one small scene where Ved talks to an Autorikshaw driver who explains how he wanted to be a singer but couldn’t due to monetary reasons, very simply stated: 'Andar Se Kuch Aur Hoon lekin Bahar se Majboor Hoon'.

Later on we see a split personality of Ved who gets shattered when Tara comes back and reminds him that in trying to belong he has lost his own identity somewhere, he has forgotten who he is, it’s not that simple as it takes the undoing of his entire life's experience and the energy. There are several scenes where we see the angst and outburst of Ved in between his normal conversations, note how he switches emotions when he confronts Tara (after somewhat called as breakup) at her home or when he freaked out his boss, that’s a psychotic behaviour one would associate with Jordon of Rockstar, Ranbir stands out in these several scenes where Deepika scores big with her expressive eyes and vibrant energy. Imtiaz Ali belongs to that rare breed of Directors that brings the best out of each artist they are working with.

Tamasha grows on you like a vintage wine, something that stays with you for long once you move out of the cinema, something that needs to be explored more and more after you watch it again, the proceedings at that time would become an experience, an experience that is very seldom felt in Bollywood may be due to fear of niche segment that such genre focuses on, a specific reason why certain audience have thrashed this badly. Honestly, I don’t remember any movie in the last two decades which affected me at this high level and left me overwhelmed and in awe of every artist involved in it.

No matter at what stage of your life you are, no matter what your are doing at present with your life, you can always change the END, you can fulfil your dreams, you can create your myth, your own story!


PS: The blogger is a music/movie analyst at www.kiagia.com
Splashed By: Mitesh Saraf