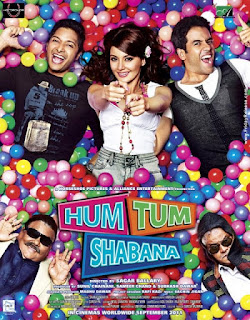 
Sachin-Jigar (music composers) have been in business since '4 baj gaye lekin Party abhi Baaki Hai'(Faltu) became a party anthem for the youth. If the music of F.A.L.T.U was high on funky-party beats, the composers proved their knack of music with Saibo in 'Shor in the city' and now with "Hum Tum Shabana"   the duo is ready to rock the charts again(with Sameer on the Lyrics).Although expectations are not very high on the music front, but a look at the variety of singers used for the 5 original and 2 remixes, one surely wants to check out whats in store for them with singers like Dr.Palash Sen(Euphoria lead singer) and Tochi Raina waiting to be heard.

The album opens with a cracker Musik Bandh Na Karo by Abhishek Nailwal, Palash Sen, and Anushka Manchanda, which has Sachin-Jigar 'party' stamp over it. A composition that will certainly refresh the memories of their previous tune '4 Baj gaye' and be a definite chart scorcher in the coming days. The voice of Palash Sen makes me wonder why he is not used more frequently in Bollywood (he last made his presence felt in Lamha last year).
No surprise that we are provided with Musik Bandh Na Karo-Remix which is more fast paced with high bass but nothing extraordinary until we hear some change in the arrangements after about 2 min 30 sec that provides a fresh feel to the song. So as the song says Chahe Saara Shehar Jag Jaye, Ye Musik Band Na karo!!

The 2nd track Hey Na Na Shabana with Raghav Sachar behind the mike enters the border of Kabhi Kabhi Aditi from Jaane Tu Ya Jaane Na with the allover theme of the song quite similar as the protagonist tries to make Shabana(Minisha Lamba) smile and forget all worries. Raghav Sachar is impressive after rendering some ordinary tunes in Phirr this year. A good composition and will work well along the narration of the movie.
Hey Na Na Shabana-Party Rap Mix is loud and makes for a good remix to be heard.

Here comes the addiction-Thank U Mr.DJ sung by Fully Faltu Mika and Suzzane.A perfect party song (rather a rap) which will be seen making roars at clubs and DJ nights for sure. The tune is catchy and the lyrics are penned kept in mind today’s youth.Mika enters his zone of 'Aey Ganpat Chal daaru la' from Shootout at Lokhandwala and at places one can feel a slight resemblance to 'Singh is King' title sung also sung by Mika.A remix would have raised the bar a little more but anyways the original will find its place for sure. Recommended!!

As one moves on to the 4th track which reads Piya Kesariyo, one gets ready for some epic classical arrangements(due to the name) but 40 sec into the song and it takes you in a jazzy-techno-rocky world of its own. It’s been beautifully and energetically sung by Anushka Manchanda and supported well by Jigar.It doesn't require a second hearing as the song reminds you a forte that belongs to Amit Trivedi ,largely due to brilliant use of electric and bass guitar. A track close to 4 minutes will be an interesting watch on the big screen and will certainly be appreciated by the audience that knows what good music is. Also the lyrics by Sameer prove why he has sustained for so long in the music industry.

The last track of the album Kaari Kaari for which the maestro Tochi Raina has been assigned the task has nothing extraordinary to offer and seems a sequel to their previous composition Bhoot Aaya in F.A.L.T.U. A fast number which tries hard to be a dance number with some unusual lyrics by Sameer but doesn’t make a lasting impression at the end. May gain popularity if promoted well.

Overall Hum Tum Shabana is high on commercial aspect and all the songs will appeal to the masses.Thank U Mr.DJ and Piya Kesariyo needs to be promoted aggressively. Good album all in all.