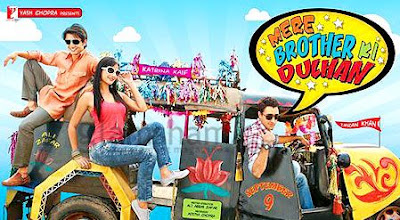 Yash Raj films always boast of some melodious tunes which prove to be a marketing tool for their movies. For more than 3 decades, they have ruled the Bollywood Industry with their musical blockbusters.2000 onward, they had used a variety of musicians,Pritam,A.R.Rehman,Vishal-Shekhar,Salim-Sulemain to name a few. For Mere Brother Ki Dulhan "Sohail Sen"  gets an opportunity to showcase what he has in store, after his impressive debut in "Whats Your Rashee"(2009) and then an ordinary score in "Khelein Hum Jee Jaan Sey"(2010).Lyrics are by "Irshaad Kamil" who is moving head to head(wait for 'Mausam') with writers like Prasoon Joshi and Amitabh Bhattacharya. Expectations are huge as the movie sees coming together of Imran-Katrina for the first time with the new sensation Ali Zafar and claims to be a musical-rock-house, especially with Kat's rock-ribbed avatar. The album offers a total of 8 tracks with 6 originals and 2 impressive remix. Let’s jump into the world of Sohail Sen and Kamil.

The album opens with a more than average title song "Mere Brother Ki Dulhan" sung by K.K,it maintains the same pitch and tempo during the whole 4 minutes until the last 40 sec.By more than average I meant that the song offers nothing much new on the musical front but is impressive when it comes to lyrics(Matrimonial si Aankhein,sabko ab taake-jhaake).But nevertheless, it will gain popularity as the video portrays Imran Khan paying tribute to all the 3 Khan's-Shahrukh,Aamir and Salman by imitating their signature moves. It may be seen in the starting credits of the movie and should be used as a background score later. A good start indeed.

"Dhunki" has already rocked the charts with its video making rounds over the idiot box. Katrina who is looking fantabulous is the U.S.P (Unique Selling Proposition) of the song. Its sung energetically by Neha Bhasin, for what could have been easily named to Sunidhi Chauhan.However, the aggressive use of electronic guitar at the start, straightaway reminded me of Vishal-Shekhar's style, more specifically of the tunes in Tashan.But as Neha Bhasin's joins in the vocals, from thereon the song totally belongs to Sohail Sen, who provides a cracker of a song. A must hear or rather a must watch.

Next in the offering is a trademark Sohail Sen composition in the name"Choomantar" crooned by talented Benny Dayal and Aditi Singh Sharma. It starts with some chirpy notes "O Baby O Baby" and then gives a heard-before feeling as the musical arrangements are quite similar with tunes of “Whats Your Rashee".Its a kind of song that requires multiple hearings before it settles down among the listeners, after which it will be hard to keep away, also it will be interesting to see how the song is picturised/used in the movie.
The Choomantar Remix by Joshiley impresses with added bass beats and becomes a perfect dance number. Worth a hear!

If you think "Dhunki " was the best one can get from Sohail Sen, comes the 'love song' for the second half of 2011,"Isq Risk" ,which will leave you spellbound, sung beautifully by none other than Rahat Fateh Ali Khan. The song is instantly catchy and highly addictive as one cannot hold back to 'replay' after the first listen. We can say that by far it’s the best commercial song from Sohail Sen's directory. What surprises me are the 'Dictions' at places in the song, like Ishq becomes 'Isq'; Mushkilo becomes 'Muskilo' and Bhasha(language) becomes 'Baasa'.Its a kind of a song which will be heard for years to come and will join the genre of "Tere Mast Mast Do Nain" and "Dil to Bachha Hai Ji".Undoubtedly the best of the lot.
For Isq Risk-Risky Mix by Joshiley, Sreeramchandra & Neha Basin replaces Rahat Fateh Ali Khan.Sreeram won the fifth season of music reality show Indian Idol 5 and as per the contract got a chance to sing a song in YRF project. His voice sounds good in this one (without comparing to RFLK) and Neha Bhasin provides ample support in this foot-tapping number. Again an impressive remix which will be seen playing in the clubs and DJ nights in the coming days.

Ali Zafar and Shweta Pandit teams up for Madhubala, a song little bit on the lines of "Khaike Paan Banaras Wala"(DON).Ali Zafar who created sensation through his songs in 'Jhoom' and 'Tere Bin Laden' does full justice to the song along with the female vocalist, Shweta.The song is loud on Dhol Beats and will be a hit among the masses and the video with Katrina beside Ali Zafar and Imran will acquire some rounds of whistling for sure. It’s a perfect entertainer and after the antara, Ali Zafar throws in a monologue-"Arey thak Gaye kya, Arey Bhaiya U.P aaye aur sala Dhol nahi baja to kya khaak U.P. aaye!!" and then comes a brilliant fusion of electric guitar and Dhol beats, a complete package indeed. May prove to be a perfect Climax song.

Sohail Sen just slightly misses out on the last composition Do Dhaari Talwar sung by Shahid Mallya and Shweta Pandit.Not that the song is avoidable but it goes on the same lines as the previous track 'Madhubala' and fails to create the same impact. Having said that, once its video is out, it will attract attention for sure. To talk of singers, Shweta Pandit is a well known name in the industry, but what grabbed my attention was the name of Shahid Mallya, who recently made his debut in 'Sahi Dhande Galat Bande' with Naino Wali Whiskey and has Rabba (Mausam) lined up. Impressive Punjabi Munda.

All in All, Mere Brother Ki Dulhan is a cracker of an album with 3 chartbusters for sure,'Dhunki','Isq Risk' and 'Madhubala' .Sohail Sen shows his versatility and talent and does full justice with an YRF venture which always carries huge expectations on musical front.
STRONGLY RECOMMENDED!!
I rate it 4 starts out of 5.