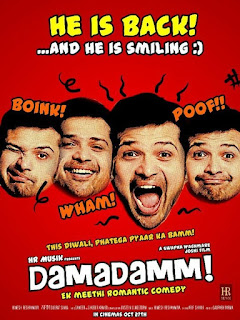 After breaking all records at being unsuccessful as an actor, Himesh Reshammiya is back with his latest venture Damadamm! which claims to be a rib-tickling musical rock house. Before his first movie as an actor in the name of Aap Ka Surror-The Real Love Story(2007) ,Himesh composed some super hits tracks for albums like Tere Naam,Namastey London,Aetraaz to name a few. But after the super success of Aashiq Banaya Aapne, Aksar and then his album Aap Ka Surror, he decided to only compose for his acting ventures with Bodyguard being an exception recently. His previous movies Karzzzz(2008),Radio(2009),Kajraare(2010) went Dhadaam at the box office and Kajraare wasn't even released worldwide, only one print was sold so that the producers can legally sell the satellite rights to the small screen(television).Nevertheless the music of all his movies attracts lots of attraction, especially among the worldwide HR fans, so this time also keeping aside the fate of the movie, lets analyse the music which as expected boasts of monstrous 15 tracks with 9 originals,5 remix and 1 promotional song with Sachin Gupta(music composer for Prince-2010 and the voice behind Tere Liye-Unplugged) for which Himesh has himself penned the lyrics.

The title song Damadamm is an unexpected number to come out from Himesh's directory with an endless list of singers Himesh Reshammiya, Vineet Singh, Alam Gir Khan, Shabaab Sabri, Punu Brara, Palak Muchhal, Sabina and Rubina Shaikh.The song will be liked instantly even if it comes to Non-HR fans, especially due to the variations in the 6 minute number which comes out as a fast -paced-qawwali with a sufiana touch to it. Having said that ,the part 'Dama Dam Mast Mast Mast Mast Kalandar' gets monotonous after a point and could have been more innovative, but still its worth a try with Himesh trying a different genre altogether.
Damadamm Remix feels unnecessary and could be avoided.

The second track Umrao Jaan with Himesh Reshammiya at the front tries hard to be funny with Purbi Joshi (backing vocals) with her 'No tuchng, Only seeing, No Kissing, Only Seeing' monologue during the whole song, but fails misrebaly.Its highly repetitive and one strongly feels that this song would appear at various junctures in the film's narrative but as an audio it offers nothing special to the listeners. However, Umrao Jaan Remix is the one to look out for with high bass and fast pace and is far better than the original.

Warning: Move further only If you are a die-hard Himesh Fan.
Here comes a trademark Himesh composition Aaja Ve which will give you a subtle wave of 'Tanhaiyaa' from Aap Ka Surror-The Real Love Story and the song Dekhun Tujhe to Pyar aaye (Apne-2007) ,the musical arrangements of which seem to have inspired this number as well. Although the song has nothing to cheer for on the lyrics front (Shabbir Ahmed) but it will strike an instant chord with Himesh fans while catching lots of ears. (Himesh's voice here is quite similar to Vineet Singh at parts)

The 4th track Madhushala is a composition of its own kind having ups and downs during its 5 minutes which sees an impressive dual-vocal by Himesh (going full nasal and non-nasal) and Aditi Singh Sharma. After Isq Risk(MBKD),comes another song with new dictions, such as Jisam,khusbu and madhusaala.If you loved Tandoori Nights(Karzzzz) Madhushala is the song to look out for, however it requires multiple hearings to adjust to its unusual style and especially the whacky dance steps by Himesh in the video.Aditi Singh Sharma after Choomantar(MBKD) starts the song with some English vocals (Ishq Unplugged-which was previously the title of the movie) and then brings a touch of 1960's in the antara that follows the harmonium plus tabla, which takes you straight back to an era of Mughal-e-Azam.(there is a vast difference in her vocals for both the renditions).


Madhushala Remix and Madhushala House Mix are both enjoyable and follows the trend that Himesh started years ago of including the Remix of his own compositions through Aashiq Banaya Aapne ,a trend that is applicable to almost every soundtrack today.

Remember Rafa Dafa Kiya nahi Jaaye from the movie Radio-2009, hear Yun To Mera Dil by Himesh and Sadhna Sargam.After a long gap one sees Sadhna Sargam in action but sadly only for 2 lines and one feels that she could have been used more, neverthless the song is engrossing with Himesh going way too low at some notes giving a relief to the listeners from his usual nasalism.Good romantic number.

The 6th track HumTum starts off brilliantly with Vaishali Mhade(SaReGaMaPa 2009 winner) churning out some classical notes but soon is taken over by Himesh and what follows is an average composition ,especially on the lyrics front which are way too simple( hum tum train ki do patri ki tarah) failing to create an impact. Disappointed! 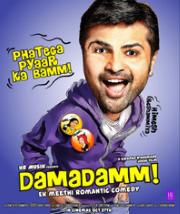 Now, the song Tere Bina is a special one and the past record for Himesh with the word 'Tere Bina' has been outstanding with Tere Bina-Aap Ka Suroor The Real Love Story being appreciated tremendously. The song has all in it to be a hit amongst Himesh's fans and will be a rage like Teri Meri from Bodyguard recently. Although this simple, breezy sounding composition seems to be inspired from the legendry song 'Kahin To Hogi Wo' from Jaane Tu Ya Jaane Na-2008 which was composed by the maestro A.R.Rehman, but still the trouble-some lyrics (Sameer) and the sad feel will work in its favour making the song popular with time. Decent hear!

Coming to the 8th track which reads I Need My Space is a save-your-ears from Himesh where he almost does a Vishal Dadlani during 'I need My Space, I need My Freedom’. A situational number which gives a heard-before feeling and could have sounded better in the voice of some other accomplished singer.

Up next is Mango, yes that’s the name of the song, which is imaginative and tries-to-be innovative, but despite Mango's engrossing melody, its brainless lyrics kill it. Supporting Himesh is Aditi Singh Sharma who once again impresses in the short High Opera-ish scale with some English vocals and renditions, long way to go for her. Sadly the attempt to create connection between a seasonal fruit 'Mango' and 'Love' seems a lame attempt on the lyrics part and doesn’t leaves a lasting impression on the listeners. The only plus for the composition is the part crooned by Aditi Singh Sharma at the start and then in the interludes, sheer brilliance, the 2nd antara(paragraph) with the English vocals is an instant reminder of the captivating song Reaching for the Rainbow from Love U Mr.Kalakaar-2011.Hear it only for Aditi Singh Sharma.

The last original, rather promotional track Bhool Jaun co-composed and co-sung by Himesh Reshammiya and Sachin Gupta is an example as to how impactful can be Himesh tunes if he allows other singers to sing. One can sense that Sachin Gupta is caught in the Tere Liye Unplugged (Prince) mode and he has tried to bring in a similar feel here as well, but nonetheless it’s a perfect end to the soundtrack and the song makes up for a decent hear which will gain popularity once its video is out.

Damadamm! doesn’t lives upto the expectations of Himesh fan’s, leave apart Non-HR fans .His previous soundtracks Radio and Karzzzz were far better and offered some repeat-value tunes, but Damadamm! except for 2 or 3 compositions has nothing to cheer for, especially on the lyrics part, it’s a big disappointment with Shabbir Ahmed doing for the Title number and Aaja Ve and Sameer for the rest of the songs. Both the writers provide nothing extraordinary for what could have been a soulful ride with Himesh rendering some heart-broken tunes. Having said that,Damadamm! will for sure find its place among HR fans but one doubt whether it will have a long shelf live.
I rate it 2.5 out of 5