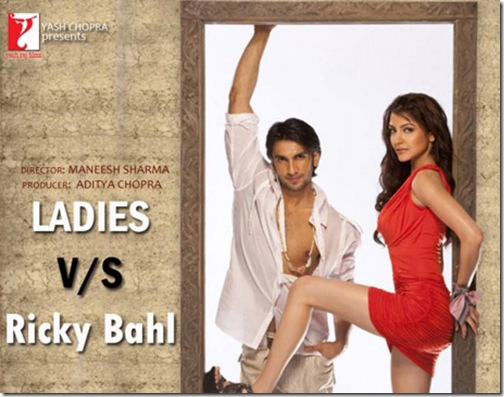 Rating: ★ ★ ★
A Yash Raj banner, a hot-successful-sizzling pair of Ranveer Singh and Anushka Sharma, add to that hit combination of composers Salim-Sulaiman and new age Lyricist Amitabh Bhattacharya (A.B.), you have Ladies V/s Ricky Bahl. The team provided an outstanding score in 'Band Baaja Baraat' (BBB) last year and without a doubt, expectations are sky high this time, so nothing less pleasant and rocking than their previous soundtrack will be accepted by the listeners. Moreover, a video with Ranveer Singh looking hot and hunk as never-before in the song 'Aadat Se Majboor' have already generated immense curiosity and buzz, so are these expectations met? Can the combination outdo their previous work?..Well, let's dwell inside the 4 originals along with 1 instrumental and 2 remixes.

"Aadat Se Majboor"-A trademark Salim-Sulaiman and Benny Dayal (Lead Vocalist and a regular with the composer duo) composition opens the soundtrack which has a young-urban feel attached to it, thanks to some effervescent lyrics by A.B. It's an attitude song which justifies the title Ladies V/s Ricky Bahl and defines the character of the protagonist with an unexpected but at the same time impressive rap portion by Ranveer Singh. It works as a dance number with rigorously punched beats getting in tandem with Benny Dayal perfect dictions and carries on the playboy, flirtatious mood throughout the song. A definite and instant chart scorcher.
The "Aadat Se Majboor Remix" is a complete mess and wasn't required for an already leg shaking number. Original will find its place over the remix undoubtedly.

The music from Yash Raj Banner/Films (YRF) has a certain template feel to it and the next track "Jazba" carries the YRF brand with much ease, as a result at places reminds of 'Dhadak Dhadak' from Bunty Aur Babli (2005) and more specifically a hint of 'Ek Hockey Dungi Rakh Ke' (ChakDe India) can be felt in the 'Zara Sa..Zara Sa' part. Shilpa Rao after having sung various songs for Priyanka Chopra, pitches perfectly for Anushka Sharma. Salim Merchant with his supporting vocals provides nothing new and rather similar to what he has been doing since his 'Fashion' (2008) days. The song lacks the punch, A.B. tries to create the same impact as in 'Tarkeebein' (BBB) through his lyrics but fails to develop the required Jazba, only Anushka Sharma onscreen presence makes the composition worth a hear. The song will be forgotten easily post the movie release. 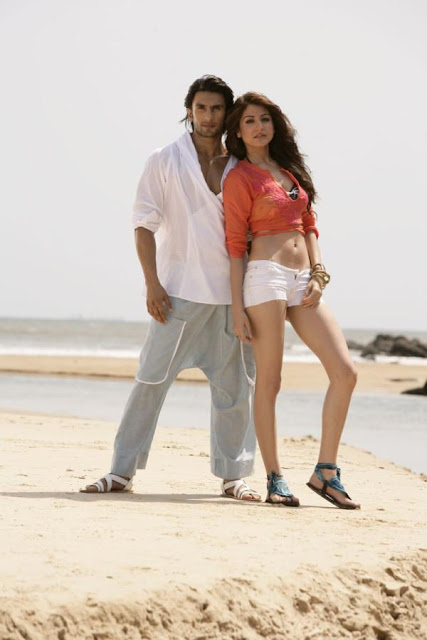 Again too much techno addition and extreme orchestra killed "Jazba-Remix" where Anushka Manchanda replaces Shilpa Rao and interestingly its real difficult to point out the differences in both female voices. Anyways, Sukhwinder Singh was wasted in 'Dum Dum-Remix' (BBB) and now Anushka Manchanda joins that list. Skip!

The Violin arrangements at the very start for the next track "Thug Le", which has Vishal Dadlani and Shweta Pandit behind the mike, develops expectations as one craves for another 'Dum Dum' outing from the composer duo. Sadly, it has everything painfully familiar and the lyrics are below average with a bit too simple tune. A vociferous voice like Vishal Dadlani has been wasted and one may call it a mediocre attempt of the song 'Ladki Kyu' from Hum Tum (2004), but A.B. fails to land on the creative field of Prasoon Joshi (Lyricist for 'Ladki Kyu'). It may work alongside the film's narrative if provided enough publicity attached with a sparkling video featuring the lead pair.

A sequel to 'Ainvayi Ainvayi' is what awaits the listener as one plays on "Jigar Da Tukda", for which Salim Merchant takes centre stage with composers hot favourite Shraddha Pandit. Thankfully the much talented A.B. is back on track with his snooty and engrossing lyrics filled with English and Hindi wordings. The Punjabi feel with some refined Bhangra arrangements makes up for a perfect Jugalbandi dance number and make no mistake, it will be majestic when it makes big on the silver screen. Agreed that it lacks the spunk and fun of 'Ainvayi Ainvayi' but still is quite capable becoming a chartbuster in the coming days. Go for it!

"Fatal Attraction", a stylish multi-layered techno instrumental which will cast a spell on people who love instrumentals and if I am not wrong the elegant backing vocals belong to Natalie Di Luccio's (also gave backing vocals in 'Aadha Ishq' from BBB). The Flute renditions at .45 to 1.00 and then again at 2.20 to 2.35 makes one stand and applaud the composer duo and more specifically the man behind the Flute- Bravo! It will be interesting to see if it is wasted in the starting/end credits or used at various junctures in the film's narrative.

Salim-Sulaiman's previous work 'Aazan' was like You-Blink-and-I-Go stuff while Love BreakUps Zindagi had only few melodious tracks and this time also they fare well below the desired expectations. The soundtrack of Ladies V/s Ricky Bahl is no way near to what Band Baaja Baraat offered but aggressive promotions and the sizzling chemistry between Ranveer and Anushka will make sure it doesn't vanishes so easily. 'Aadat Se Majboor' is already a big hit and 'Jigar Da Tukda' is likely to follow once the video splashes.