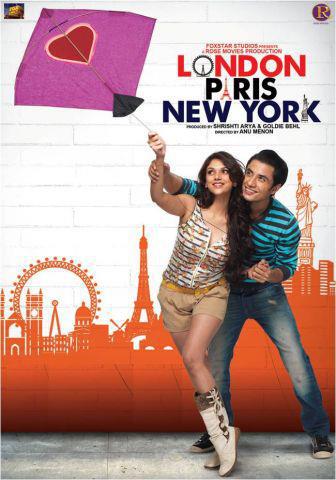 Rating: ★ ★ 1/2
A look at the CD cover and Ali Zafar is the name that dominates most part of the credits; Music Composer, Lyricist, Singer and Lead Actor. London Paris New York (LPNY) is one soundtrack where the listeners doesn't actually know what to expect, sole reason being Ali Zafar's past record (in Bollywood) where considerably he has only 'Madhubala' (Mere Brother Ki Dulhan) in his bag as a lead singer apart from 'Tere Bin Laden'. Doing the lyrics alongside music and singing makes up for a real tough task and is a very risky affair (Himesh Reshammiya is a prime example). LPNY pairs up Aditi Rao Hydari and Ali Zafar where Aditi Rao is also seen crooning two tunes out of six originals and one acoustic version.

It kick-starts with the title song "London Paris New York" which starts beautifully with some female alaap by Sunidhi Chauhan alongside piano and Ali Zafar joining with his ''worth noticing'' dictions. Although nothing much new on the music front with an ordinary interlude but surely the singing by Ali Zafar is appreciable. The Hindi-English lyrics will attract ears and the cool promotional video will surely make up for a number with some repeat value. Peppy and Foot tapping!

Piano dominates the 2nd track, "Vo Dekhnay Mein" which has a Déjà Vu feel attached to it, especially the antaras. Ali Zafar does well in creating a peaceful environment. The lyrics are simple and appreciable. In the singing department, he is impressive but at the same time falls flat with the high notes and almost does a Kishore Kumar at the end. Wonder what a voice like that of Mohit Chauhan would have done to this number! Anyways a good decent track.
"Vo Dekhnay Mein-Female Acoustic Version" starts off gracefully with Aditi Rao Hydari doing the vocals alongside polished guitar strums. To everyone disappointment, the duration is only of one minute and makes one wanting for more. Aditi makes one fall in love just with few lines; wonder what was Ali thinking by including a one minute version which would go unnoticed, what otherwise could have been a fantastic reprise version.

After two good tracks, one expects some more pretentious tunes, but sadly the 3rd track, "Ting Rang" is rather a disappointment. An attempt to bring in the Punjabi flavour with the blend of Dhol and western beats alongside harmonium looks good but the singing is a big letdown. Quite honestly, Ali Zafar's voice doesn't suit the genre and a Mika or Master Saleem would have provided that extra zing and infused some more energy into the song. The video and the picturisation might do some damage control but as an audio, it’s an average composition.

"Thehree Si Zindagi" is gripping and certainly the best of the lot. Ali Zafar and Aditi Rao Hydari with their voice create an Aura that stays with you and is a kind of composition that one can't resist to listen on 'Repeat Mode'. Ali Zafar is surely a reincarnation of Atif Aslam. Aditi Rao Hydari is simply terrific and strikes gold in her sensational debut as a lead playback singer. The lyrics are refined and first-class. Ali Zafar certainly deserves a pat on his back for the multi-tasking job. However, the last one minute of the track looks a tad bit overstretched with a never ending chorus and could have been eradicated. Still, an absorbing composition which definitely deserve a hearing or two. Don't miss this one!

Hadiqa Kiani (Few songs in 'Bol') and Sanam Marvi, two hugely popular Pakistani artists join in for "Oo Lala" and the talent is completely wasted in this fast paced noisy track. After one minute of extensive orchestration, Sanam Marvi throws in some Classical-Sufi notes with Hadiqa Kiani trying to make you do 'Oo Lala' but fails completely. The English rap in the interlude adds insult to injury and Ali Zafar's 20 seconds stint at the end makes up for way too experimentation. Skip!

"Aaja" is an interesting tale of heart-break which shifts gears after 1.30 minute with the drunken voice of Ali Zafar who makes sure that he remains the only name as the Male lead playback in the soundtrack. Some Punjabi lyrics dominate the proceedings and ends much sooner when the listeners try to adjust to the unusual pace of the 2nd half. Nothing much to boast about this 3 minute composition.


Overall, LPNY looses its way in between and certainly lacks in the singing department with an overdose of Ali Zafar, maybe he should have tried with some more bankable artists to bring on the much needed variety. Sunidhi Chauhan hardly makes her presence felt in the title song but Aditi Rao Hydari, as I already said, is opulent. Another area where it could have done much more is with the lyrics which are way too simple at places and some which we have heard a zillion times. Still, 'Thehree Si Zindagi' is quite appreciable with 'Vo Dekhnay Mein' storming up the charts with the Valentines-Day on the cards.
I rate it 2.5 out of 5.
Edited Version@ Planet-Bollywood
Splashed By: Mitesh Saraf