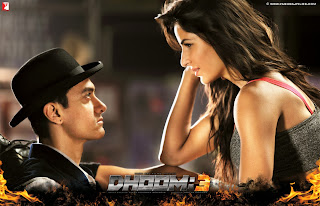 Expectations...Expectations...and more Expectations...This how one looks forward to the music of "Dhoom 3"...and why not, after all it's the most anticipated and awaited movie of 2013..a third instalment of 'Dhoom Series' with big bankable names of Aamir Khan and Katrina Kaif whereas Abhishek Bachchan, Uday Chopra and Pritam Chakraborty (Music Director) preserves their seat from the previous instalments, joining them is composer Julius Packiam who has two compositions on his name in this one. With five originals, one Arabic version, one instrumental and one overture, listeners expect some energetic adrenaline pumping tunes!

"Malang" makes a grand entry at the onset and is one of those compositions that catches attention instantly, add to that some magnificent fusion of Indian (classical), Arabic and Western arrangements alongside Siddharth Mahadevan and Shilpa Rao's enthusiastic renditions..Result: A Masterpiece! The song is musically rich where it starts with a long prelude and then the Arabic arrangements takes the proceedings forward, the interlude with the classical alaaps (2:42 to 3:08) of the signature Dhoom Tune defines the word Creativity. Lyricist Sameer Anjaan plays safe in his own territory with phrases like: Meri Ulfaton Mein , Meri Shiddatton Mein, Sajdo Mein, Tera Hi Noor Hai, Teri Bekhudi Mein, Teri Dilkashi Mein, Teri Bandagi Mein Dil Choor Hai; it portrays the unbiased love between the protagonists and Sameer succeeds in making the listeners feel the same. This one is pre-climax material which is sure to rule the charts for at least a month if not more! Rightly defined in the promos: Spectacular!

Remember the composition 'Sheila Ki Jawani' from 'Tees Maar Khan' that created havoc all around.."Kamli" falls in that flirtatious category straightaway, be it Sunidhi Chauhan's stylish magnetic renditions or Katrina's charismatic drop-dead-gorgeous screen presence. Moreover, Amitabh Bhattacharya writes some Punjabi lyrics that demands attention and has more depth than any item number ever had in past few years. It will attract whistles and hooting all around and is sure to rock the charts as soon as the movie hits the big screen. Chartbuster in the making!

After two magnificent tracks, the soundtrack gets into the back-foot with "Tu Hi Junoon", sung by Mohit Chauhan; it reminds of Pritam's previous tunes with Mohit and tries hard to re-create the same magic but fails miserably. Kausar Munir writes some average lyrics that doesn't impresses either, moreover the composition is stretched to five minutes where the listeners almost  looses their patience in between after three minutes and does what needs to be done...SKIP! Wonder how it will be justifiably placed in a thriller without hammering the pace of the movie, hope it doesn't ends out to be another 'Dil Tu Hi Bata' (Krrish 3) acting as a mere filler. Hope the lavish picturisation with Aamir and Katrina provides something striking!

Up next "Dhoom Machale Dhoom" sounds more of a remixed version of original 'Dhoom Machale' -Dhoom (2004) with club like arrangements and one can also hear Dhol in the background for the signature tune. Aditi Singh Sharma infuses energy and passion with her renditions and gets full marks for matching up to the standards set by Sunidhi Chauhan previously although Sameer Anjaan's lyrics goes unnoticed as the word 'Dhoom Dhoom' has been used for each line and phrase. For listeners seeking something new and exciting, this one may sound disappointing to some of them with the overall treatment of the composition which offers nothing much new but for the promotional campaign it's working pretty well with Katrina's onscreen presence. Moving up the soundtrack we also have "Dhoom Machale Dhoom (Arabic Version)" where the lyrics go total Arabic on the same music and arrangements. Lebanese singer Naya sings the Arabic renditions and the listeners wonder if this version was needed at all, as we can't understand even a single phrase except 'Dhoom Machale Dhoom Machale’? It would have made some sense if there has been some experimentation done on the musical front also along with the lyrics and singer as everything else has a western touch rather than Arabic. Still, a good experiment instead of the remix fillers!

When a track has been credited to a ten year old artist/singer named Shivam Mahadevan (son of Shankar Mahadevan) and Anish Sharma; one really doesn't know what to expect out of it, moreover when it's been composed by musician Julius Packiam.."Bandey Hai Hum Uske" exceeds expectations in all departments. It has a trance feeling attached to it and casts a magical spell on the listeners. The lyrics by Kausar Munir and Vijay Krishna Acharya are magical and throw light on the character of Aamir Khan who plays a Circus Artist and one is sure that there is more than just a thief to his character. Here is an extract:
'Bandey Hai Hum Uske, Humpe Kiska Zor,
Umeedon Ke Suraj, Nikle Chaaro Aur,
Iraadey Hai Fauladi, Himmati Har Kadam,
Apne Haatho Kismat Likhne, Aaj Chale Hai Hum'
Amazing composition which would be kept for the most crucial point in the movie and may be used in the background as we see Aamir Khan humming those lines in the trailer. Keep this one on Repeat mode!

"Dhoom Tap" reminds of 'Dhoom Again' - Dhoom 2 in parts, the arrangements builds up nicely in layers alongside signature Dhoom Tune on Electric guitar and drum beats. Again, a nice experiment as far as instrumentals is concerned. Thumps up! 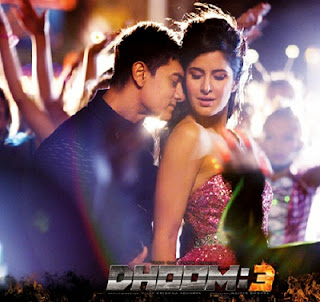 Julius Packiam is in his elements and trademark form in "Dhoom: 3 Overture" which is a four minute instrumental composed for the background score. Overture is basically an opening instrumental to an Opera and it's the first time that this type of thing has been placed in a Bollywood soundtrack. It starts on a slow note with the tune of 'Bandey Hai Hum Uske' in the first half with a touch of thrill and mystery, at 2: 45 it picks up momentum with Guitars and Keyboard and is clearly indicative of the composer forte as the electric guitar strums reminds of 'Tiger's Theme' (Ek Tha Tiger), though only for a moment. The four minutes are sheer listening delight!

To sum up "Dhoom 3" lives up to the expectations to a certain extent, the compositions will slowly grow post the movie release, especially 'Malang', 'Kamli' which would stay right at the top. 'Bandey Hai Hum Uske' will find its own set of listeners with time and would be a really interesting watch on screen along with 'Dhoom Tap'. Julius Packiam hits the ball right out of the park with his two compositions which are the highlight of the soundtrack!