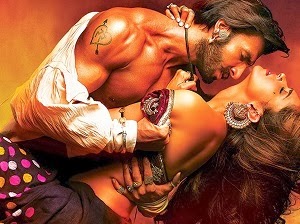 Sanjay Leela Bhansali (SBL) is one such name which takes one's expectations to all new levels and moreover to a sky high when he composes music for his films ; 'Saawariya' (One Song) and 'Guzaarish'; Now with "Ram-Leela", an adaptation of Romeo-Juliet, listeners craves for a pure musical outing with an aroma of romance and love with extreme repeat value. Music of SLB directorial ventures has certain auras of their own that takes some time to establish/grow and are mostly situational based with a grand lavish picturisation and some heavy choreography. With a huge tracklist of ten (10) songs without any filler remix/reprise versions, let's enter into the field of dreams of Sanjay Leela Bhansali and lyricists Siddharth-Garima!

The soundtrack kick-starts with "Ram Chahe Leela", a rock genre layered with some Gujarati interludes/prelude; where debutant Bhoomi Trivedi (Reality Show Contestant) instils energy and style with her renditions and then we have some bold lyrics that throws some light on why the society/family interferes between the two lovers who can do anything for each other. The picturisation will see Priyanka Chopra in a guest appearance and is bound to ignite fire and fumes! Chartbuster!

"Lahu Munh Lag Gaya" has a Bhansali stamp all over, starting from the folk’s Gujarati arrangements to the beautiful poetry rendered magically by Shail Hada (remember 'Tera Zikr Hai' from 'Guzaarish') to the garba interlude ..Everything has a trance feeling that needs some hearings to settle down. The picturisation displays a scorching chemistry between Deepika Padukone and Ranveer Singh which instantly takes one back to the days of 'Aankhon Ki Gustakhiyaan' from 'Hum Dil De Chuke Sanam', although only visually and not by any means close to that musically. The first half of the song is about the male protagonist describing how he has got addicted to her lover with the phrase 'Lahu Munh Lag Gaya'...Amazingly written! Later it has various layers with lots of instruments being used, particularly Bhungal which is a trademark of Gujarati folk...Creativity at its best! Commercially it may not gain the popularity that it deserves as it caters to only a niche segment of listeners but will be loved by everyone post the movie release!

Another reality show contestant (Indian Idol Season-1) Adyta Paul marks her mainstream Bollywood entry (after a small stint in recently released 'Warning') with "Ang Laga De" which oozes romance, love, passion and sensuality with each word where we hear very minimum arrangements. Aditi Paul enters the territory of Shreya Ghoshal and cast a spell with her renditions, Shail Hada's classical notes in between and towards the end adds sugary touch to this lyrically rich composition. The gratifying visualisation will definitely enhance the repeat value! Must hear!

Shail Hada's "Poore Chand" is a soothing number with poetic lyrics; although the four minutes offers nothing much special or new with just one single paragraph and gets a bit repetitive towards the end but still it has the aroma of romance which would make it a good watch onscreen.

Up next "Nagada Sang Dhol" is certainly the best of the lot which portrays the Gujarati folk/Garba with some heavy lavish choreography brilliantly performed by Deepika Padukone. Words falls short for an artist like Shreya Ghoshal who is so amazing with her energetic yet charming renditions here, Osman Mir does a five second alaaps at the end. Certainly, comparisons are ought to be made with 'Dholi Taaro Dhol Baaje' from 'Hum Dil De Chuke Sanam' but there isn't any similarity apart from the word 'Dhol Baaje', the previous one was a complete dance number with some western arrangements here and there and some Ched-Chaad lyrics whereas this one is completely Indian or I would say Gujarati at heart and has a completely different theme and picturisation. The Gujarati chorus part from 2: 22 to 2: 48 and then from 3:52 till end has a trance feel attached to it and transports the listeners to somewhere else. A composition which will be placed at a crucial juncture in the movie and is Chartbuster element!

Arijit Singh, who has been a household name ever after ''Tum Hi Ho Meri Aashiqui' (Aashiqui 2) happened (very few know that he has sung 'Phir Mohabbat' - Murder 2) has been roped in for "Laal Ishq", his name alone generates enough curiosity and expectations these days and when we have a track duration of almost about 7 minutes, we know we are in for some sheer listening delight. The composition flows like a soothing poetry around Arijit's refined mesmerising vocals, it certainly demands time and patience to develop a taste for such melody but once it does, it's going to stay for a long time. Notice how various instruments are being used in tandem- Shehnai, Sitar, Guitar to name a few..Intoxicating, let the magic prevail!

Aditya Narayan, who is still to cement his place in the music industry, brings on "Ishqyaun Dishqyaun"
which tries to add variety to the soundtrack and is composed keeping in mind the commercial listeners/Aam Janta with some entertaining lyrics but sadly it doesn't carries the required hook and the overall result is quite average. Aditya Narayan maintains the same pitch during the five minutes and sounds sweet and cute where a vociferous voice like Vishal Dadlani would have suited more to such genre. As an audio this one tries too hard but who knows Ranveer Singh may pull this one in style! 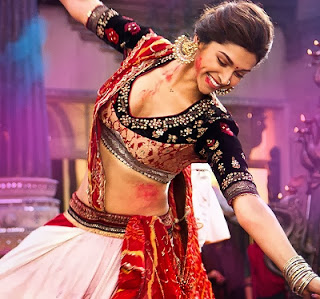 The movie is based in Gujarat (Rajasthan) and it would be incomplete without a traditional Gujarati track.."Mor Bani Thanghat" (My Heart Is Dancing Like A Peacock) has a certain addictive flow to it with some extravagant instruments (especially the Sitar in the second interlude 2: 06 to 2: 28) being used..Lovely! Osman Mir does most of the vocals (the lyrics are in Gujarati so one needs to do some Google to actually feel this lovely poem) and Aditi Paul supports him pretty well and I must say both are super fabulous. This one is made keeping in mind the character of Leela aka Deepika Padukone in the movie and should be used as an introductory song for her character. (PS: Please Google it and read the translation which has so many layers into it and develops a feeling of 'WoW.)

"Dhoop" by Shreya Ghoshal has a haunting prelude and suffers from "Devdas" hook and reminds of Aishwarya Rai dancing around with a Dia in hand (‘Silsila Yeh Chahat Ka Na Maine Bhujne Diya' ) although that feeling diminishes as the song progresses. The tempo is kept at minimum slow; Shreya is a mistress of this genre and delivers this one with élan. This is pure situational stuff where Leela has just fallen in love with Ram (Ranveer Singh) and is rejoicing this lovely feeling of being in love.

The song that has been heavily promoted from past two weeks stands tall at number ten.."Tatta Tattad" marks the introduction of Ram in the movie where Aditya Narayan make amends and brings on the required energy at the same maintaining the naughtiness and raapchikpan that we can very easily associate with the character of Ranveer Singh. The hook line 'Tattad Tattad' which plays non-stop in half of the song and that choreography where Ganesh Acharya makes Ranveer does that thing to his back hair, gets a bit repetitive and may irritate to a certain segment of audiences but never mind as it's the USP of this composition and listeners/viewers get used to it after certain hearings/views. This one is for the visuals where Ranveer has hit the nail on his head. Hit! 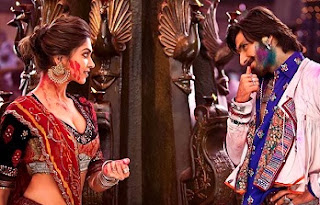 "Ram-Leela" is a soundtrack very reminiscent of Sanjay Leela Bhansali trademark and the overall feel of the songs reminds of his previous soundtracks; 'Hum Dil De Chuke Sanam' (Ismail Darbar) and 'Devdas' (Ismail Darbar), although this is not by means close to those two gems of soundtracks which were near perfect. The characters of his films are very well crafted and the songs plays a very vital role in all his movies, same is the case here where the songs, mostly 'Lahu Munh Laga Gaya', 'Ang Laga De' and 'Laal Ishq' will grow tremendously once the visuals are unleashed. 'Ram Chahe Leela' lands in some other territory and will be a rage with Priyanka Chopra and is surely kept safe for the promotional strategy 15 days prior to the movie release. To conclude, comparisons apart, this is one of the finest soundtracks to come this year with some magical tunes that portrays pure traditional Indian music rather than depending on Western arrangements. In short, all the songs results in a magical experience...a charming, delightful, sensuous Experience!


The writer is editor/music/movie critic at www.planetbollywood.com
Splashed By: Mitesh Saraf