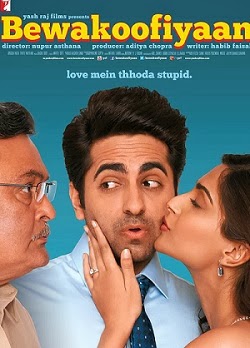 "Our songs are never lip synced by gorgeous faces and great actors and actresses, the only way we get heard is by playing our songs Live, hundreds of thousands of times"-Raghu Dixit on winning the "Live Performer of the Year" award at the The Great Indian Music Awards 2014. He composed some good stuff for ‘Mujhse Fraaandship Karoge’ under Y-Films (a youth wing of Yash Raj Films) with Director Nupur Ashthana (Debut), she collaborates with Raghu Dixit for her second project as a director.."Bewakoofiyaan" which brings along some good expectations deviating from the stereotyped love melodious numbers. Ayushmann Khurrana (the lead actor) and Rochak Kohli have one guest composition amongst the six originals (no reprise/remix versions) which generates curiosity as their past two compositions have connected really well with listeners ('Paani Da Rang' and 'Saddi Gali Aaja'). Let's see what these talented artists have in store for us!

"Gulcharrey" straightaway caters to the young listeners with a club/techno feel attached to it, the unusual, carefree and creative lyrics by Anvita Dutt Guptan in tandem with some charismatic diction's by Benny Dayal makes up for a crackling start, Aditi Singh Sharma does a sort of chorus only and her voice goes almost unnoticeable, though the overlapping effect does add that extra zing to this one.

"Khamakhaan" unfolds like a story/narration with some fabulous Guitar strums and flute arrangements. Neeti Mohan's voice is sweet and has a certain different texture to it; Ayushmann Khurrana is superlative with his part and ups the entertainment quotient. Habib Faisal writes some situational stuff that aptly describes the two characters: A girl who believes in love without caring for anything else and a boy who thinks that money is equally important as love. Certainly, the Best of the lot.

Raghu Dixit is in his elements for the title track "Bewakoofiyaan" where he gets behind the mike and does a creative 'Bewakoo OOO fiyaaann' for the hook line. The arrangements are more inclined towards 'rock' genre with lots of Guitar and Drums, also, the flute renditions are always a treat to hear and especially when played alongside Drums (from 2:47 to 3:20). The lyrics by Anvita Dutt are quite situational and describe the crux of the movie centred on the character of male protagonist Ayushman Khurana. A simple track presented creatively  by Raghu dixit in his own way, expect this one to play multiple times post interval and certainly the one which would grow post the movie release.

It's been long since Mohit Chauhan and Shreya Ghoshal came together for a song (probably since the inception of Arijit Singh).."Rumaani Sa" falls short of expectations that one has from these two hugely talented artists. Anvita Guptan writes some romantic stuff (Rumaani Sa means A little romantic) but is let down by the arrangements which makes the overall result a sort of club/dance territory that doesn't have that magical charm, although the second paragraph and the vocals makes the song a good hear. 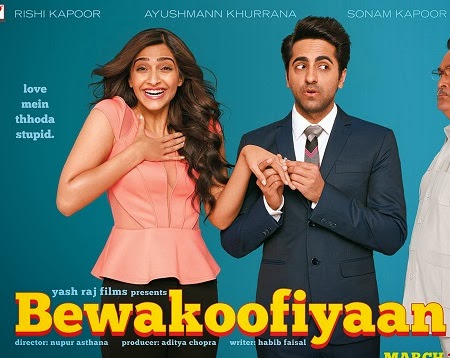 Led by Guitar and Banjo; "Aye Jigida" has Vishal Dadlani written all over it with his vociferous trademark renditions, what with some eccentric jugalbandi of Violin, Flute and a bit of Harmonium in the second interlude (from 2:15 to 2:48). Anvita Dutt writes some carefree motivational stuff describing about the male protagonist, the hook line 'Aye Jigida Jigida' may sound repetitive for once but it settles down soon and should make pretty much sense in the movie. Overall, a fabulous composition!

Ayushman Khurana and Rochak Kohli's (co-composed and written) romantic number "O Heeriye" (released as a single released last year) has that Indi-Pop flavour along with Punjabi lyrics. It has minimum orchestra, mostly Guitar and Drums, Ayushman does well for the really low pitch renditions at the start and then at the end; the song does catches your attention instantly but as far as comparison goes from the duo's previous two super hit compositions as mentioned above, this one fares pretty average and wouldn't enjoy a shelve life.

"Bewakoofiyan" meets the expectations to an extent with some different tunes led by heavy orchestra/arrangements where the lyrics play a crucial part. All the compositions have a situational appeal and probably the fate of the songs largely depends upon how they are promoted and how well the movie fares at the box office. Overall, a soundtrack that offers something different from the typical Bollywood Masala soundtracks.
The writer/blogger is editor/music critic @ www.planetbollywood.com