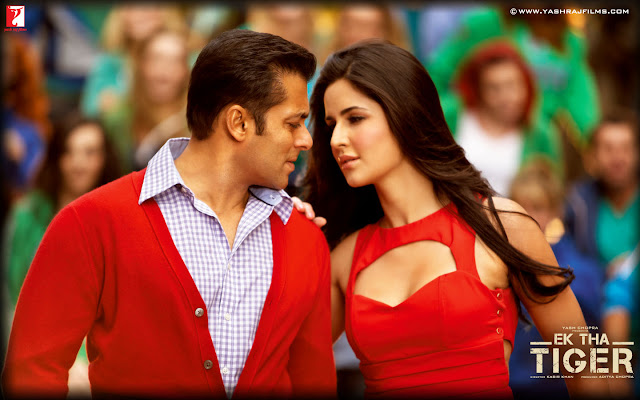 Rating: ★ ★ 1/2
Salman Khan..Eid...15th August..And a gorgeous Katrina Kaif..Can it get any bigger? "Ek Tha Tiger" is one of the most anticipated movies of 2012 and is expected to shatter all records at the box office with a tag of 'Sure Shot Blockbuster'. Talented Sohail Sen has been roped in with Sajid-Wajid as guest composers. For the lyrics department, names like Neelesh Misra, Kausar Munir and Anvita Dutt Guptan makes sure that the soundtrack results in a grandiose affair. Well, with four originals, few remixes and one instrumental let the Tiger roar!

"Mashallah" the only composition by Sajid-Wajid rides high on commercial aspects and is a multi layered composition with lots of Arabic/ Persian arrangements. The signature tune with the harmonium and the chorus enchants is a hangover from Anu Malik's 'Milo Na Milo' but nevertheless it has the capability to win hearts and accolades. The video is amazingly shot with the sizzling, smoking Katrina Kaif and our very own Salman Khan in his usual enigma. Lyricist Kausar Munir doesn't write anything that we haven't heard before so nothing much to be appreciated in the writing department. As for the singing, Wajid introduces a new diction for 'Mashallah' and is at his usual best where his voice seems to be tailor made for Salman and yes, Shreya Ghoshal is sparklingly remarkable in her short part. A good start indeed! "Mashallah Remix" by Joshilay is a real mess with the annoying high tempo and forced beats, skip the remix.

'Salsa' like arrangements starts of "Laapata" where 'Yash Raj Banner' makes their presence felt straight away, sadly it seems to be a rehash version from the 'Dhoom' franchise ('Salaame' and a bit of 'Touch Me' to be specific). Reality show contestant Palak Muchhal starts of gracefully taking us back to the early days of Shreya Ghoshal and is joined by the 'bankable' K.K. who oozes romance/love with each line. If the trumpet used from 1.21 to 1.28 is mesmerizing then at the same time the arrangements from 1.47 to 1.56 are weirdly lifted from 'Antenna' (Always Kabhi Kabhi). Anvita Dutt Guptan tries real hard with the lyrics but the end result fails to create a long lasting impression as a result it turns out to be an average effort from Sohail Sen. Although expect a sizzler when the video unleashes! Joshilay brings forward "Laapata Remix", a fast paced club dance number which only acts as filler without an inch of an innovation.

"Banjaara" belongs to Salman Khan..A fast paced love number where Neelesh Misra majestically uses the word Banjaara for the state of being in love rather than describing the pain with it as in most cases, still the antara’s are not upto the calibre of an artist like Neelesh Misra. Sohail Sen eminently uses the Violin loop during the whole song for the signature tune, the use of sargams in the first interlude and the harmonium in the second interlude is graceful and awe inspiring, something that is expected out of Sohail Sen composition. Sukhwinder Singh is a kind of artist who hardly disappoints regardless the genre and this time also his powerful vocals makes sure that the song lands in the 'Hit' category although a lot still depends upon how it is being picturised in the movie looking at the situational tag that it carries. Moving on "Banjaara Remix" sung and arranged by Jolly (Joshilay) is the best of the three remix. Never an easy task to replace a singer like Sukhwinder Singh but it results in a good alternate version where the 'Tiger Theme' can also be heard in the second interlude. Terrific Remix! 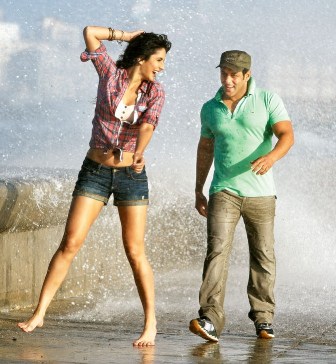 Mohit Chauhan and Taraannum Mallik bring together a captivating, melodious "Saiyyara" which is instant catch material and has all the ingredients of a riveting soul stirring composition. After a very long time Mohit Chauhan is heard in some high pitched notes and full marks to him for that where as Taraannum Malik lavishly handles the ultra low notes and supports him well. Kausar Munir does a much better job as compared to 'Mashallah' but still nothing groundbreaking or monumental as far as the writing goes, especially both the antara's.  Make no mistake, despite the tried and tested heard before template, it's going to be huge hit among Salman fans and will remain in the top 10 for quite some time even after the movie ends its run on the Silver Screen.

Last to arrive is the "Tiger's Theme" composed by Julius Packiam, a 'Hot' favourite with director Kabir Khan who has used his service for the instrumentals/themes in his previous two directorial ventures: 'Kabul Express' (2006) and 'New York' (2009). It starts off with the electric and bass guitar, a tune that is already a popular ringtone material courtesy the theatrical trailer and goes into the 'Bourne' meets 'Bond' at some points The three minutes are heavily arranged and apart from the starting credentials, expect this one to be used at various crucial junctures post interval.

Ek Tha Tiger doesn't match upto the expectations and lacks the repeat value with a very limited shelf life. Sajid-Wajid's 'Mashallah' is the only major attraction and the three songs by Sohail Sen falls in the average category with minimum innovation where his previous two soundtracks: What's Your Raashee (2009) and Mere Brother Ki Dulhan (2011) were far more impressive, but considering the presence of Salman Khan, 'Banjaara' and 'Saiyyara' are going to be the 'Hot Seller'.
I rate it 2.5 out of 5.0
Version @ Planet-Bollywood
Splashed By: Mitesh Saraf