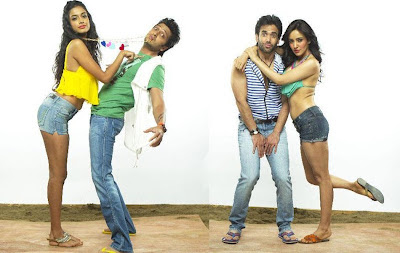 Rating: ★ ★ 1/2
A adult sex-com doesn't quite comes with humungnous expectations when it comes to the music, rightly so, "Kya Super Kool Hai Hum" (a sequel to 'Kya Kool Hai Hum') comes with only four original compositions but surprisingly with three music directors being used, namely: Sachin-Jigar; Anjjaan - Meet Bros and Shankar-Ehsaan-Loy (S-E-L). Let's see if there is anything 'Kool' for the music lovers !

Bang On..the first and only composition by Sachin-Jigar "Dil Garden Garden Ho Gaya" is addictive, catchy, funky and aptly written by guest lyricist Mayur Puri keeping in sync with the theme and content of the movie. Vishal Dadlani's voice is energetic and the auto-tuned effect is well used. The lyrics does gets a bit suggestive and double meaning at places but it's the beats and retro feel that works for the song and makes it the best of the four originals. Good start although the "Dil Garden Garden Ho Gaya Remix" wasn't required at all with few changes here and there as the original has enough pace and beats.

Anjjan - Meet Bros brings "Shirt Da Button" which is a winner and takes only few hearings to adjust to the unusual lyrics by Kumaar. Sonu Nigam is magnificent as always and sings his heart out in this melodious composition which has a touch of qawwali provided to it. At first, one may get annoyed by the start where the lyrics goes a bit wayward as the title of the song says but as the song progresses, one hears some pretentious alaaps and the unconventional lyrics catches attention, especially in the anataras. Go and hum around this hat-ke lovely romantic song ! Moving on, a fusion of Indian-Western beats starts of "Shirt Da Button Version 2" where surprisingly Kailash Kher replaces Sonu and is joined by Anjjan-Meet Bros themselves for the chorus part. With Kailash Kher behind the mike, the composition is inclined more towards the sufi zone, especially both the interludes with a fantastic harmonium in the second one.The focus shifts to the vocals from melody as in the original and there are enough variations to hear out for. A well handled alternate version which will certainly get listeners hooked.

"Hum To Hai Cappuccino (U.P. - Bihar Lootne)" is a surprise package; a rehash male version of S-E-L's very own 'U.P- Bihar Lootne' from 'Shool' with some sparkling and stormy singing by hugely talented Sukhwinder Singh and Daler Mehndi. Lyricist Kumaar deserves a pat on his back for the lyrics:
Apne Thumke Pe Clap Kare Duniya, Beech Me Hindi Me Rap Kare Muniya,
Raub MTV jaisa, Doordarshan Sa Dil Hai,
Entry Apni To Taaliyon Ke Kabil Hai.
A blustery dance number that goes all loud at the end with the Maharashtrian dhol as Riteish Deshmukh joins the vocals for this part. No doubt  that this one is aimed at the massess and the popularity depends upon the picturisation and promotions. Video can do wonders. 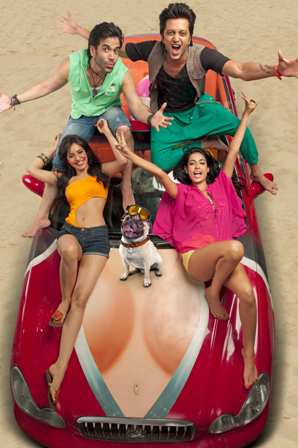 The last composition by Anjjan - Meet Bros "Volume High Karle" is the weakest of all and reminds of Pritam's 'Pyaar Do Pyaar Lo' at the very onset. An average tried and tested template which has nothing new, neither the vocals of Neeraj Shridhar provides anything fresh nor the lyrics by Kumaar offers anything that deserves attention. Don't bother giving it a hear neither the "Volume High Karle Remix". SKIP both !